In February, one of our New Zealand Vacations team, Jerry Bridge, along with his wife Katie and their two young children decided to explore the narrow sliver of land that is found at the very top of the South Island - Farewell Spit, located in Golden Bay. Here's what they reported about what was obviously a great vacation experience.

Jerry's adventure - "To make it onto my 'New Zealand Favorites' list it has to offer something super-special. A road trip to Golden Bay and Farewell Spit beckoned, a place that's been on my wish list for a while. Time to meander off the beaten track I thought!

We started from Wellington with a journey from the North to the South Island on the Inter-Island Ferry, across Cook Strait then cruising through the beautiful Marlborough Sounds.This was nothing short of breath-taking. Our children, Alice and Reilly, loved it especially when entertained by a clown for a good part of it. The crossing, sometimes dolphin accompanied, passes remote sparkling beaches dotted with occasional water-access-only homes and weaves between lush hills and waters colored every shade of blue. Time for a lunchtime drink - we were on our way.

After a quick stop in Picton Bakery to grab a not-to-be-missed pie (a Kiwi icon) we drove off on our hour and a half drive to Nelson via the iconic Queen Charlotte Drive to spend two nights with friends. The Queen Charlotte Drive is included in the 'North Island & the Catlins in the South' itinerary and on other journeys on our New Zealand Vacations website.

Nelson is named after Englishman Admiral Nelson and the city regularly comes out tops in national statistics for the longest sunshine hours. It's also close to the Marlborough wine region where the Cloudy Bay, Allan Scott and Stoneleigh labels reign supreme. All sampled and enjoyed along the way of course.

During the next stage of our journey we made a raspberry picking stop at the Omahanui Berryfruit Gardens in Braeburn which necessitated a walk across a wobbly bridge, thrilling the kids no end and leaving me feeling a little bit like Indiana Jones. 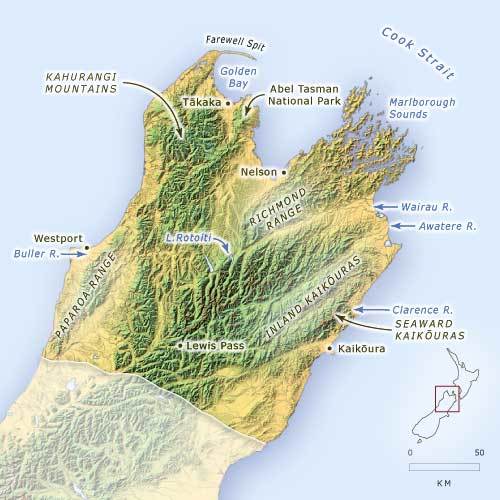 And so on, to the absolute beach-front $60 a night Golden Bay Kiwi Holiday Camp where we pitched our tent right by the dunes and close to the river estuary. Amenities included a playground area and go-karts along with washing and shower facilities.

So followed days of fun in the sun and nights under star-studded skies that included a trip to Pupu Springs (official name Te Waikoropupu Springs) which has to qualify as the clearest spring water I have ever seen. It also just so happens to be the largest cold water springs in the Southern Hemisphere.

Next day we met up with our Wellingtonian friends Mike and Nina, Zen and Polly along with their children for a memorable day out to the beach at Farewell Spit. I have to say the beach here has to be one of the most beautiful I have ever had the pleasure to visit. You'll see by the look on my face in the photo, just how much I enjoyed it. This natural playground for both the young and the young-at-heart features caves, lagoons, time-sculpted rock formations and white sand dunes which simply scream at you to leap down or better still to slide down on a boogie board!

Top picks for food 'refuelling' between adventures included the 'Mussel Inn' - great food and their own brew, ‘Heat Rash Chilli Beer’ made a great combo.

Collingwood Village – once a contender for NZ's capital - has great pizza at The Old Court House Café run by the enthusiastic and friendly Kylie who joined us for a drink under the stars at our camp-site a couple of nights later.

Grabbing one of the wonderful fresh fruit ice-creams at the local 'On The Spot’ store became essential revival after a day at the beach and being able to take a dip in the refreshing outdoor local school swimming pool was a big hit.

So, how did the top of the South Island rate and would I recommend this road trip? Well that would be a 'yes, absolutely' with the highlight of this classic New Zealand road trip being, without doubt, the wonderful beach at Farewell Spit"