It's not widely known, even by many New Zealanders, that over the past 140-years, many species of wallaby have been introduced into New Zealand, all from Australia. Some for zoos and others for private collections. Unfortunately, many have escaped and they have bred in the wild, in such large numbers, they are now regarded as a pest, especially to those in the farming community.

Oversea visitors have sometimes claimed "I was in New Zealand and I saw a Kangaroo in the wild".

What they would have seen was a wallaby.

From 1870, wallabies started to be brought into New Zealand from Australia, some for private collections, others for zoos and others just released into the wild, possibly with a view to providing hunters with some sport.

5-species in all set up home, including Bennett’s and Dama wallaby, and on Kawau Island near Auckland, Dama, Parma, Brush-Tailed Rock, and Swamp wallabies.

Two of these species in particular have thrived, in the North Island, the Bennett's Wallaby, and in the South Island the Dama Wallaby. Having reached such large numbers, estimated to be in the hundreds of thousands, they are causing damage to the indigenous forests of New Zealand and threatening native birdlife by eating the fruit, seeds and flowers that both depend on. 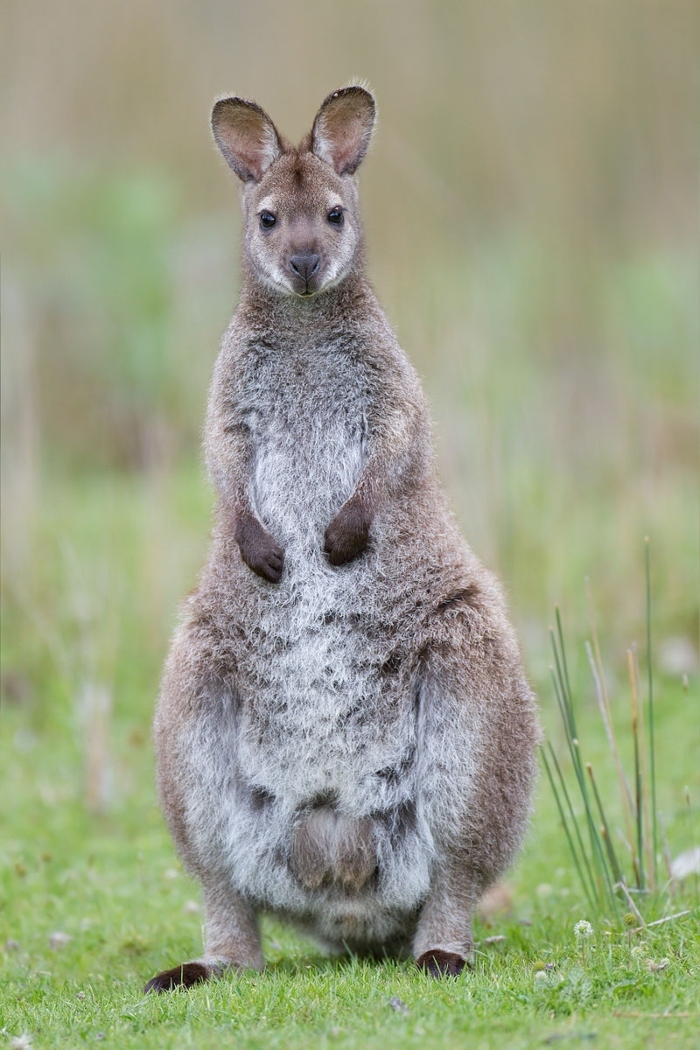 They are very shy animals and spends their days resting under dense vegetation, only emerging to eat after dark, so despite their growing numbers, they are not often seen. That's the reason most New Zealander's are surprised when they learn how widespread they have become.

Tammar Wallaby with a joey (baby) in her pouch.

Concerns about the destruction of native ecosystems are now so worrisome, that scientists are working with the New Zealand Government to find a way to control the wallaby population and as a result, the fluffy marsupial might not have an exciting long-term future in New Zealand.

This newspaper report from July last year provides an insight to how serious the problem has become.

"Farmers in the Maniototo (a farming region of the South Island) believe the surge of wallabies represents a once-in-a-lifetime problem which could have huge implications for the region.

Kyeburn farmer Hamish MacKenzie said the issue was the "biggest threat to farming since the rabbit plague of 100 years ago".

Wedderburn farmer Peter Hore said the implications for the region were huge.

"It may be the most significant thing in my lifetime, they're in a league of their own.

This is an extremely serious problem and we'll need a lot of money to deal with them."

The creature can travel up to 6 km during the night and back, Mr Brown said.

He said it was starting to cost some farmers near the Waitaki River more than $50,000 a year on shooting and poisoning.

It was only a matter of time before it started costing farmers further south.

"As soon as they build their numbers up here, we'll be in for all sorts of trouble.

For farmers in Central Otago, South Island, the elusive nature of the low-lying pest meant it was a strenuous task to control the animal.

"It's not even looking for a needle in a hay-stack; it's trying to find a needle in 200-odd thousand hectares of the Maniototo," Mr MacKenzie said.

Military-style surveillance gear was needed to detect wallabies, he said.

Last year Environment Canterbury, Trap and Trigger and Heliventures NZ flew three test operations with thermal animal-detection equipment to detect and kill wallabies in areas outside South Canterbury's "containment area" where the animals are known to have spread.

Just one wallaby was detected and killed.

So, if you hear someone say "I was in New Zealand and I saw a Kangaroo in the wild" what they will have actually seen is a wallaby.

If you would like to keep an eye out for wallabies on your New Zealand self-drive vacation, the best opportunity to see one, will probably be the 17 Day Amazing Contrasts self drive itinerary.

In the government budget this week, the following was allocated -

"$27m for the Ministry for Primary Industries to get populations of wallabies in the Bay of Plenty, Waikato, Canterbury and Otago under control"

This report from New Zealand Newspaper "Stuff" provides an update on the wallaby situation.