New Zealand has literally hundreds of beautiful waterfalls, especially in the rain-forests of Fiordland National Park. This is a photo of Lake Browne the lake that overflows to create The Browne Falls in Doubtful Sound. The Browne Falls is unofficially the tallest waterfall in New Zealand, and one of the tallest in the world, but this description is controversial and we'll explain why.

Why is it described as "unofficially" the tallest waterfall in New Zealand?

Because some experts say that The Browne Falls are actually a cascade, since they tumble down a mountainside and almost no water falls free of the rockface. Personally I think it looks like a waterfall and with a total drop of 2,744 ft, that's good enough for me! Wikipedia agrees, naming it the 10th highest in the world.

New Zealand Vacations provides two opportunities to see the Browne Falls. Either from above on a sightseeing flight between Milford Sound and Queenstown, or from the bottom, as part of the brilliant overnight of cruise on Doubtful Sound. Be warned however; there are so many spectacular falls of similar height in Doubtful Sound, that it's sometimes difficult to identify exactly which of them is The Browne Falls. Your cruise captain will identify the "real" one.

Some years ago I had the privilege of flying over the Browne Falls and it was a sight that remains fresh in my memory; an experience of a lifetime. 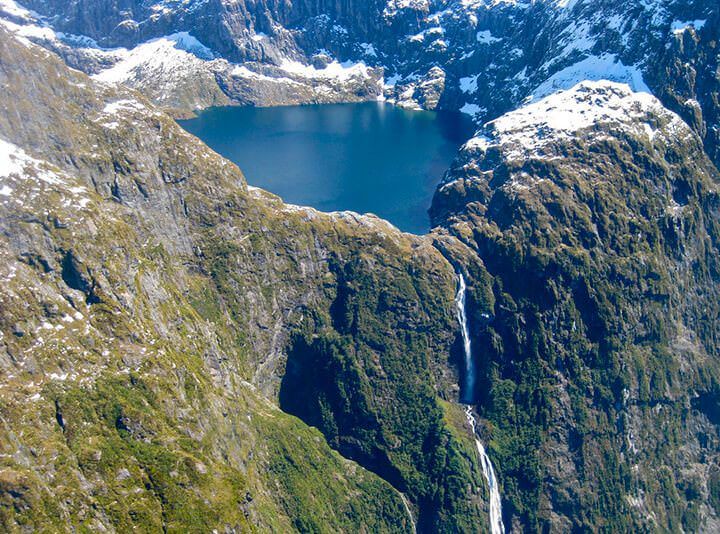 Thanks to Amanda and her travel blog "A Dangerous Business" for the use of this photograph.

"Visitors feel humbled yet uplifted by the atmosphere of powerful solitude in the presence of the superb physical grandeur of Doubtful Sound.

Sometimes called 'the Sound of Silence', there is a cloistered serenity within Doubtful Sound that contrasts with Milford Sound. The fiord is rich in flora and fauna, New Zealand Fur Seals and Fiordland Crested Penguins can be seen on many of the small islets at the entrance of the fiord.

At 421 metres deep, Doubtful is the deepest of the fiords and is long and winding with three distinct 'arms' and several outstanding waterfalls in the area from Deep Cove to the open ocean, a distance of around 40.4 kilometres."

We are often asked "should we do Milford or Doubtful Sound?" They are different but equally beautiful. There is no perfect time to see them, they are equally beautiful in the rain or sunshine. The ideal way to see either of the sounds is by doing a overnight cruise. If you have the time see them both.