Imagine popping out to the gym one morning and returning to find a wild young seal has made itself at home in your absence. It happened. Once hunted close to extinction, the species is once again flourishing and causing some problems. A seal recently stopping a kids' soccer match when it ambled onto the field. Another closed a community swimming pool for weeks when it took up residence.

But let's return to the story about the teenage seal that invited itself into a New Zealand home.

Jenn Ross rose just before 6am last Wednesday to go to the gym.

As she got in the car, something barked from underneath and shuffled away. She thought it was someone’s dog … and didn’t really think too much of it.

She returned around 7am, opening the door to find “a cute little seal” had moved in. 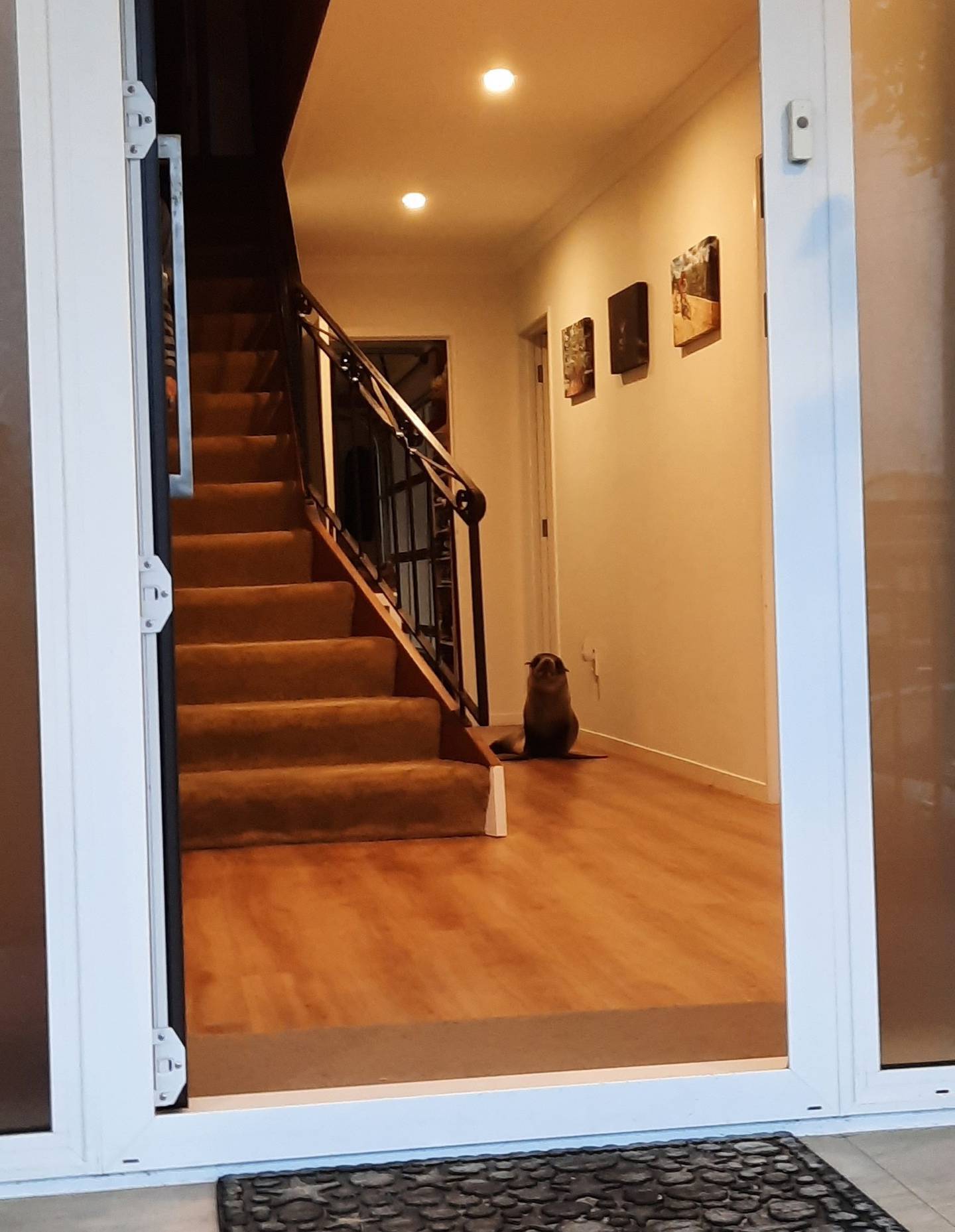 “It got a bit of a fright and humped its way down the hallway into the spare room.”

The Ross family home is in Mt Maunganui in the North Island, about 200-yards from the shore.

Husband Phil Ross, who happens to be a marine biologist, said it was unfortunate he was the only one not home at the time.

“The big joke is that this is really the only family emergency where it would be useful to have a marine biologist in the house,” he said. “I really missed my time to shine.”

Ross said the seal had managed to make its way through two cat-doors to get into the home. He believes it had encountered the family’s territorial cat, Coco, outside, just after Jenn had left the property, and had likely been inside for an hour.

“The cat would have gone to defend its territory and obviously the seal wasn’t as intimidated as some dogs are, so Coco must have bolted around the side of the house, into the cat-door, and the seal must have followed her.”

“They thought it was cool and pretty exciting"

The seal spent time in the spare room and on the couch before Jenn managed to usher it out the front door and into the garden. A Department of Conservation ranger turned up at 10am to take the seal back to the sea, after a busy morning of seal-related call-outs.

The seal, which the family nicknamed “Oscar” in a long tradition of giving seals that name in the community, proved to be polite company, Ross said, and thankfully had not defecated inside. “I think that would have been pretty terminal for the furniture.”

Meanwhile, Coco the cat had scarpered (fled) to the neighbor’s house. On returning to its own home, it refused to go downstairs because it was “clearly pretty traumatized”.

Ross said it was not unusual to see young seals roaming about in the area at this time of year, because the young ones were beginning to wean and head out on their own.

“I guess, like all teenagers, they don’t necessarily make sensible decisions.”

The curious young seal has not returned, having broken in, harassed the family cat, hung about in the hallway for a couple of hours while the children slept upstairs, and in the process, miraculously, ruined nothing.

The New Zealand fur seal population is making a comeback in large numbers (approximately 200,000) and recolonizing much of their former range. As cute as they may be, seals can move quickly and can inflict serious injuries if they feel threatened. They also carry infectious diseases.

The Department of Conservation recommends staying at least 100-feet away, to not make loud noises in their presence and to keep dogs and children well out of their way. In emergencies there is a hotline: 0800 362 468.